Despite my assertion in my earlier post, the barn was not complete. There was one nagging problem. The floor. The floor was previously covered in fugly peel and stick vinyl tiles. They wouldn't have been so bad if they were the black and white checkerboard ones but these were just really unattractive and they were starting to unstick completely.
Underneath the tiles was a plywood subfloor. On line I saw some examples and a few tutorials of painted subfloors. So we decided to just pull up the tiles and paint the plywood black. 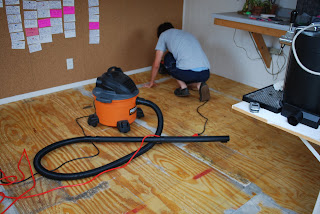 We borrowed a friend's belt sander and sanded down the floors. There was quite a bit of stickyness from the old vinyl tiles which did not really all come off with the sanding. We decided that since this is the barn it doesn't have to be perfect. If we were doing this inside our house we would have been much more thorough and probably patched some screw holes and the gaps between the plywood sheets better.
Then, after taping, we primed the floor with grey tinted primer and then two coats of Valspar latex gloss porch and floor paint in dark kettle black. 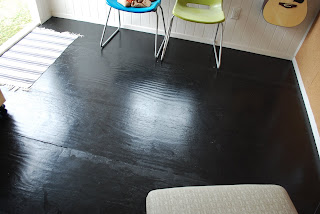 It covered really well and it looks pretty great. The only problem is that it shows every speck of dirt and dust. Black was probably not the best choice for the floor of a building that you have to walk through grass to get to. 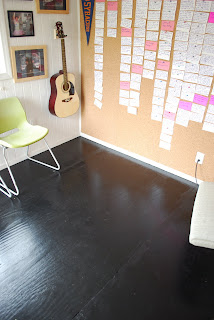 It has made me think that probably one of the reasons that natural wood floors are so common all over the world is because brown is close to the color of most dirt and dust.
Posted by kraken at 10:22 AM

Looks great! Maybe Harris and Flynn can buy Nate a swiffer for his father's day present.

@Liana Harris and Flynn are cats who don't have any of their own currency and you want/expect them to BUY me a father's day present?! UNREASONABLE EXPECTATIONS MAKE CATS DESTINED TO FAIL.

This floor looks amazing!!!! Did it hold up well with the animals in the house? Is there anything that you would do differently? Our carpeting is a nightmare. I want to do the same until we can afford flooring. Please let me know if you have any ideas or suggestions. Thanks, Kathy

kraken
Torrance, CA, United States
I live with my husband, dog (Keita) and two cats (Flynn and Harris) in our new to us house that we are in the process of making our own. In my spare time I love drawing, screen printing and other crafts. I also have a slight obsession with thrift shopping.

This is a Flickr badge showing public photos and videos from krakencrafts. Make your own badge here.